END_OF_DOCUMENT_TOKEN_TO_BE_REPLACED

There is a thread in the hit Broadway musical Hamilton that goes like this:

Who lives, who dies

who tells your story?

It starts with George Washington counselling Hamilton, desperate for a command, to lead troops (Act I):

WASHINGTON: Let me tell you what I wish I’d known

When I was young and dreamed of glory.

You have no control.

WASHINGTON, COMPANY: Who lives who dies, who tells your story.

WASHINGTON: I know that we can win.

I know that greatness lies in you.

But remember from here on in,

WASHINGTON, HAMILTON, MEN: History has its

When it’s over, it’s over. This is one of the principles of Open Space Technology a conversation process founded by Harrison Owen. The idea is this: when your conversation feels like it is over, ask, “is it over?” If yes, you move on to another conversation that energizes you. If no, you make arrangements to continue. END_OF_DOCUMENT_TOKEN_TO_BE_REPLACED

Alexander Hamilton, protagonist in the Broadway hit Hamilton (and founding father of the United States), finds himself in a tricky situation:

I hadn’t slept in a week.

I was weak, I was awake.

More in need of a break.

That’s when Miss Maria Reynolds walked into my life…

And he slept with her, over and over, when he knew he should “say no to this”:

I wish I could say that was the last time.

I said that the last time. It became as pastime.

A month into this endeavour I received a letter

From a Mr. James Reynolds, even better…

And so the blackmail begins and eventually the truth must come out. When accused of embezzling government funds he has to come clean to Jefferson, Madison and Burr:

That’s when Reynolds extorted me

For a sordid fee.

I paid him quarterly.

I may have mortally wounded my prospects but my papers are orderly!

Yet Hamilton makes the decision to sabotage his dream of being president of the United states–he comes clean and writes the Reynolds Pamphlet, making his torrid affair explicit. He destroys his dream, his wife and his mistress. And, of course, Jefferson, Madison and Burr celebrate:

That’s one less thing to worry about…

And they are stunned:

Did you ever see somebody ruin their own life?

I, too, am stunned, by the contrast in his behaviour: this inability to say no to Maria Reynolds and his ability to say yes to coming clean. And he comes clean not only with his rivals Jefferson, Madison and Burr (and their gentlemen’s agreement to keep it secret), but he makes the whole affair public.

I’ve said yes to figuring out what compels me to dig into Hamilton over and over again. I’ve said yes to writing about it to see the possibilities for my work and life. This time, I receive the gift of noticing what I say yes to, and what I say no to. It shines a light on the choices I make that make me the kind of person I am. I am of my own making.

What did you say no to that changed your life?

This is the third post in a series that touch on the Broadway hit Hamilton. It started with Room where it happens, followed by Stay in it.

A circle of two enables me to stay in it.

The words of Alexander Hamilton in the Broadway hit, Hamilton: “seize the moment and stay in it.” Now granted, Hamilton is heading into the battle of Yorktown when Hamilton creator Lin-Manuel Miranda has him say these words. (The words that immediately follow are, “It’s either that or the business end of a bayonet.”) For Hamilton and his mates it’s about staying alive, literally. The metaphor applies to life today, whether we find ourselves physically fighting for survival, or in a more spiritual way.

Sometimes, to “stay in it”, to stay in the battle of grappling with growing awareness in myself, I need someone to sit with me. Here are the wise words of Camilla Gibb, in This is Happy:

Soon enough, words are pouring out, two winters’ worth of ice thawing overnight: the grief and that tight know of anger lodged in the pit of me becoming unstuck. Unmoored, though, they threaten to destroy everything. The feelings are bigger than me, stronger. I am aftraid of their intensity; I am afraid of going crazy, of doing harm, of standing on a bridge plenty high enough, when this is no longer, if it ever was, an option.

One witness, though—one reliable and loving witness with the capacity to hold—can change what you are convinced will be the inevitable outcome.

It is hard work to see and feel what we don’t want to see and feel. Witnessing growing awareness, without judgment, is a beautiful gift to give self and others.

Sometimes a circle of two is all we need. It is one of the essential ways in which make room for “it” to happen.

Who gives you the space you need to figure out who you are growing into?

This is the second in a series of posts drawing on the hit Broadway Musical Hamilton. Here is a link to the first: Room where it happens.

I found myself in the company of people a couple weeks ago who completely understand and respect others’ needs to set limits and boundaries for themselves, so we can enable each other to show up well. In the language of The Circle Way, this is the “ask for what you need” agreement. In reflection, I have learned that I am not always quick enough to realize what I need, let alone ask for it. I didn’t.

Here’s what happened. We circled up for a board meeting for a few days and we had a lot on our agenda so we met for long, full days. On day one, I got up early to maintain my morning practice of writing and walking. On day two I was feeling under the weather, so I chose to sleep in the morning. Still under the weather on day three I chose to sleep. My ability to function and contribute lessened and lessened with each day both because of not feeling well, but also because I did not give myself the things that nourish me every day: time to exercise and fresh air and time alone to write and read.

Over the last several years I have become more introverted; I need more time alone to figure out what I think and feel about things. A day full of other people (including mornings and evenings), let alone several days, is a challenge to my inner well-being. I need time alone to look after my introvert so I can be my best self, for me and others. Without this time my energy stores deplete and my ability to be my best self declines.

I need time alone to look after my introvert so I can be my best self, for me and others.

Last week I didn’t take the initiative to make more time for myself, or to ask for our work schedule to change to allow more spaciousness. This opportunity to reflect has allowed me to see two underlying ideas.

Second idea: my needs are not as important as others’ needs. In my drive to be in the room where it happens, I fear rocking the boat, or letting other people down by either proposing something preposterous, or by simply not being available when needed.

Our meeting was productive and meaningful. It was a challenging time for us and we met each other well and yet I feel that for me, and how I show up for myself, there is room for improvement. How can I spend days with others, from dawn into the evening, in ways that maintain or even increase my energy stores?

Two contrasting shapes of how to spend three days together come to mind:

Unscheduled time in our lives helps us do our work. Over a few days of meeting, it is essential to find play time both with others and alone. It helps a group be its best self. When we look away from the tasks at hand, for a moment even, we can see what needs to be done more clearly.

Unscheduled time in our lives helps us do our work.

In my case, I learned that I need to let go of the need to be in the room where it happens and give myself space to discern which room I want to be in. Further, I need to make room for the work to work me, for this is how I find my way, how I figure out what and how to contribute to the world around me.

Asking for what I need is about enabling myself to be me.

How do you make room for you to be you, for “it” to happen?

[They] sought to create art that consciously responded to the world events surrounding them. All saw art as a form of spiritual quest.

I found these words in the Seattle Art Museum’s (SAM) pamphlet on their summer exhibition: Modernism in the Pacific Northwest: The Myths & the Mystical, describing the work of Mark Tobey, Morris Graves, Kenneth Callahan, and Guy Anderson.  As I explored their work, and the text provided by SAM, here are some juicy bits:

visualizations of the world in flux, of the human spirit transcendent, or of the cosmos.
If there was any hope that the world could survive the threat of annihilation, . . .  it was found  . . .  from the closely observed cycle of life.
. . . symbols . . .  through close observation of the world around them – in the energy of the wartime city or in the fight for survival that defines the natural world. . .
. . . the visual language of Northwest Coast people as a . . .  lexicon of symbols for conveying universal brotherhood, a common spirituality  and a belief in the primacy of the laws of nature. . .

And I was compelled to see how the titles of their artwork could fit together:

The mythic and the mystical form
follows man, a rummage of
moving moments
riding on the mountain
in the white night
searching for the morning
dove of the inner eye
to find on the seventh day
the seed was in itself

And Seattle? She was beautiful too. She is her own artwork.

I’m just home from attending the Integral Theory Conference – Connecting the Integral Kosmopolitan in San Francisco, taking some time to settle in at home. I just came across this poem I caught at the end of the session I held with Marilyn Hamilton, the first mini-prototype of an Integral City Learning Lhabitat.

Here’s what particpants had to say at the conclusion of our session:

Thanks to all our participants! You played well 🙂 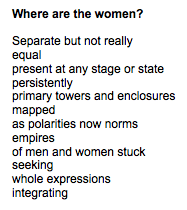 Thank you to Elizabeth for sharing her exploration of wo/men in evolutionary enlightenment. Following your passion means you are being the best citizen you can be.

As the opening remarks and Candy Chang’s opening plenary at the Canadian Institute of Planners national conference on Sunday July 7, 2013 have been brewing in me the last few days, I realize I just needed to notice what was wanting to happen. A poem: 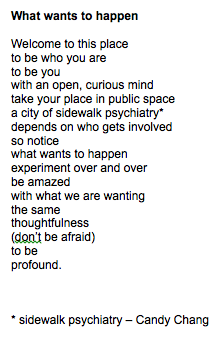 In other words, be the best citizen you can be.