He was a conference speaker with an urgent message: we must change our ways or we will die. We will only save ourselves if we do what he says, what he prescribes.

His subject matter was climate change, but the subject didn’t matter. It was his stance: I know more than you do and if you don’t do what I say, you will die, we will all die. At one point his volume went up a notch to say: 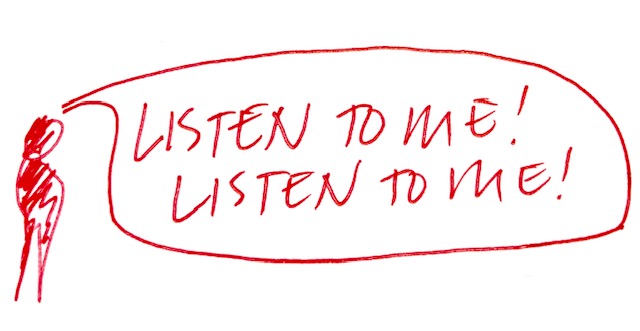 My initial reaction was that it didn’t feel good to be yelled at. I also didn’t feel that blasting a crowd who believes what has has to say was an effective strategy to have a us listen. I chose to stay in my seat to hear what he had to say because he is wise and knowledgable; there was brilliant content in his presentation and his message. AND simultaneously I understood that his delivery was both inappropriate and ineffective.

There was brilliant content in his presentation and his message. AND simultaneously I understood that his delivery was both inappropriate and ineffective.

A week later I realize that what bothers me most is the message that I received: that I/we need to be saved and he is my/our saviour. I experienced his stance as one of superiority; only he knows how we will be saved. I experienced his stance as one of fear, and that the harsh truth–loud and fast–is the only thing that will spark us into action. And, of course, that the action we take must be the action he wants us to take, in line with his master plan. (Yes, he used the words ‘master plan’.)

On reflection, today I see: a 74-year-old white man with a master plan will save the world. His backstory (as I imagine it): a lifetime of brilliant and unacknowledged work, and rejection from all major decision makers. He’s a rare human who can see our future better than we can, but since we can’t hear it, or don’t like to hear it, we have tuned him out for decades. So does he yell to be heard? Is this why he doesn’t even notice when the crowd before him is a few hundred people he does not have to convince? Is he so used to yelling to be heard that this is the only way he knows to talk about his work? Is it because he can no longer trust or believe that he is being heard, or that we are not the right people in power so we don’t count?

These questions and any potential answers don’t actually matter. They help me humanize him and empathize with him, but at the end of the day my experience is the same: he was insensitive and violent in the delivery of his message.

He denies, with a stance of superiority and unwavering belief in his master plan, the sovereignty of others.

If he wants to motivate me, this is not how to do it.

If he wants to motivate most people, this is not how to do it.

In the end, a good reminder for me to always check in with myself to see if I believe I am better than others. I know I “see” things others do not yet see, but what I do with that information, and how I share it, is crucial. It doesn’t mean keeping things to myself so I don’t upset anyone, and it doesn’t mean overselling people my message.

The saviour stance does not undertake this discernment because the interaction is not about the audience, it is only about the saviour playing the role of saviour.

There’s a delicate balance in this about knowing ‘where’ an audience is, what it can tolerate, and what it needs to know even if it makes them uncomfortable. (Note: when it is an imminent emergency don’t hold back.) The saviour stance does not undertake this discernment because the interaction is not about the audience, it is only about the saviour playing the role of saviour. And this is the violence of dehumanizing the people ostensibly served: it is the ego of the saviour who is served.

Under what conditions does it make sense to put the sage on the stage?

If we let go of needing expertise on the stage, what could happen next?

2 thoughts on “The violent saviour”