… cities must be regarded as more than engines of wealth; they must be viewed as systems that should be shaped to improve human well-being…

The dispersed city lives not only in the durability of buildings, parking lots, and highways, but also in the habits of professionals who make our cities.

A question of mine:

What role do professionals have in the design of our cities – and our entrenchment, replication and expansion of our current city pattern?

In a recent post, Cities design our lives, I touched on Charles Montgomery’s notion of autopoieisis in cities: that cities, like many other systems, are prone to reproduce themselves. So what is the role of the professional in this process? The engineers, architects, landscape architects and city planners?

Let’s start by getting clear on the roles in city making.  Marilyn Hamilton offers four perspectives of the city, each of which has a distinct and essential role in the creation and recreation of the city (check out Integral City): 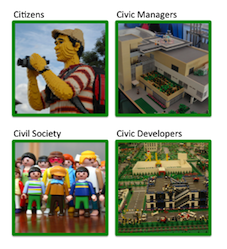 This means that the whole city system needs to see, and make, the shift toward a more sustainable, or happy, city. We are all a part of it. And yes, there are habits of professionals – and everyone else’s habits in what is expected of professionals.

Professions support the status quo and push new things, but the new things only happen when the decision makers decide to make the new things happen. And those decision makers are everywhere: in city hall, in living rooms, in board rooms, and in community centres. Everyone’s work on the margin, promoting and trying out new ideas, is essential for us to see what else is possible for our cities.

Remember this: city-building professionals are required to serve the public interest.

In your city, who is talking about whether your city is serving the public interest?

I’ve posted a couple times about Charles Montgomery’s Happy City: Transforming our Lives Through Urban Design. Here they are for you to explore: