Who do you want to be?

Hazel realized wearily that Bigwig was probably going to be troublesome.  He was certainly no coward, but he was likely to remain steady only as long as he could see his way clear and be sure of what to do.  To him, perplexity was worse than danger; and when he was perplexed, he usually grew angry.

The exchange that takes place in a city revolves around three elements – self, other and place – at any scale. Just as I need to have a sense of my purpose, so too does my city. As I work toward my purpose, I am in relationship with others and the places around me. Place is the habitat I find myself in, and that too is at scale. It is the office I work in, my home, my block and neighbourhood and city, as well as my country and my planet. At every turn, there is an exchange that takes place between me, others and place.

In a simple statement, Rabbi Shmuley Boteach articulates a pithy question that leads to purpose and destination. This is a question that can be put to me and my city with equal import. Richard Adams articulates the struggle of the human condition when we are unsure of what to do, and the emotional charge embedded in uncertainty. Cities are no different – when we lack a sense of purpose to our cities, we certainly feel the emotional charges. It shows up in our exchanges in others, and the quality of the habitats we build for ourselves.

Here’s a wicked question for you and your city –

Who does your city want to be?

An example of how my city is figuring this out: Make Something Edmonton. 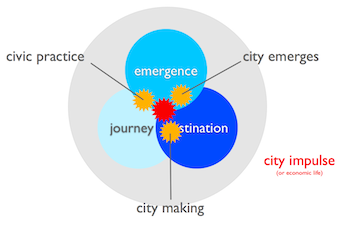 Cities are about getting where we want to go – at every scale.

As individuals in cities, when our basic needs are met, we are able to pursue our passions. We pursue opportunities to dig deep into the work we love. We pursue improvements that will make life better. We contribute all of this to the city-life experience. Its a messy place, often making us feel uncomfortable, but it spurs us on to a never-ending quest, should we choose, to think, make and do new things.

How can we know if we are making the cities we want and need? By choosing to build cities purposefully, a necessary transaction emerges: we need to know if we are getting what we are seeking. The next series of posts explore the relationships between citizens and cities – the city making exchange – and the feedback loops we need to make cities that serve us well.

What do we need from our cities?

What do our cities need from us? 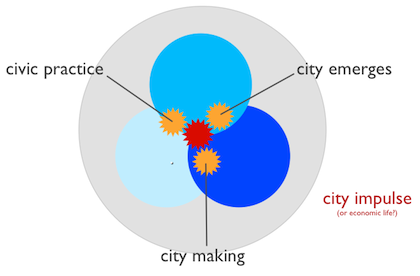 In Part 3 – Nestworks, the three circles of destination, journey and emergence introduced in Part 2 are integrated, resulting in three cog-like features of city nestworks: city making, civic practice, and the city emerging. At the heart of the city’s nestworks is a sweet spot at the center – the city impulse that is explored in Part 1 – City Patterns: 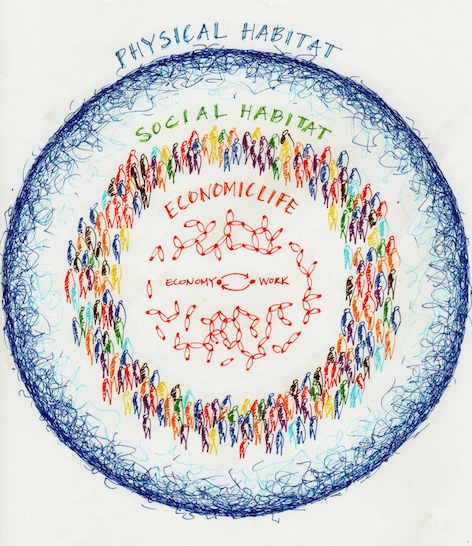 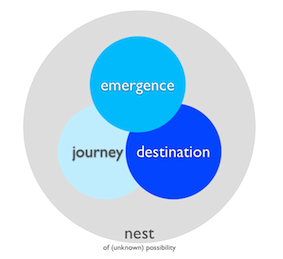 Part 3 – Nestworks looks at the how the circles interact with each other: 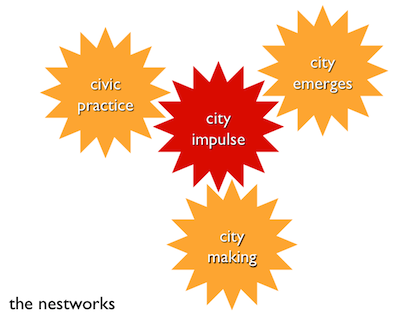 Chapter 8 – The City Making Exchange is about getting where we want to go. How can we know if we are making the cities we want and need? By choosing to build cities purposefully, a necessary transaction emerges: we need to know if we are getting what we are seeking. This chapter explores the feedback loops and mechanisms to notice if we get what we want.

Chapter 9 – Enduring Civic Practice explores how citizenship affects our ability to create cities that serve citizens well. How we ‘show up’ has an impact on the well being of ourselves and our city. Our practices create the conditions for us to each offer the diversity of work needed for the city to be able to met the needs of its inhabitants. There is a deeper knowing in us in our work and life – what will it take to find it?

Chapter 10 – The Emerging City asks how our collective practice creates cities that serve citizens. Humanity has a great desire to live life beyond mere survival.We desire, deeply, to thrive and this is why we build cities. As past civilizations have fallen, so too will ours without making the necessary connection between our economic life and our social and physical habitats. We can choose to create the conditions to thrive in ways we have yet to contemplate by searching for processes that allow us to aim for a destination – even if we do now know exactly what it is.

Chapter 11 – Nest City wraps up this endeavour – for now. The sweet spot in the nestworks is scalar – it is found in individuals, families, neighbourhoods, cities, regions, continents, etc. It is elusive, but it is the place that knits our journey with a destination and the surprise of things that emerge. It is where we notice the kind of city we wish to create and the practices that are needed to move in that direction. It is about noticing what we need to thrive and organizing ourselves to create cities that will support us on our evolutionary journey.

Nest City is organized into three parts, each with a collection of chapters. Here are some plot helpers:

As I begin blogging parts of Nest City’s third part, I realize that I am at a point in writing where I feel the least comfortable with the terrain I am about to cover.

The ‘front end’ of my work, Part One – City Patterns was the most clear. It builds a broad foundation for my argument, that cities build evolutionary capacity. I introduce foundational impulse patterns that explain why cities exist, how they are created and the underlying values that evolve within and with us as our cities grow and develop. The content I was going to explore was clear and it was a matter of making it clear – a most useful blogging exercise.

As I embarked on Part Two – Organizing for Emergence, which explores the organizing patterns of humans as we create and live in cities, I had a frame that needed to be fleshed out. We organize to reach a destination, we experience uncertainty along the way, and the future that comes to pass is something unexpected at every turn. This is how the nest works: destination, journey and emergence. Compared to Part One, I content ‘ready’ to write and explore in blog posts; it was messy and disorganized. I didn’t know exactly how it would turn out.

Part Three – Nest City embodies the ’emergence’ piece of the dynamic explored in Part Two. I have a destination in mind (the frame for Part Three), I am on a journey publicly learning here with you while I write, and I have no idea exactly how this will turn out.

The direction I am moving in, however, is integration of destination, journey and emergence. I see a “nestwork”, a cog-like relationship of these three organizing patterns, and a sweet spot, that will shed light on how to co-create cities that serve us well. That is what I will be sharing as I explore, publicly, Part Three – Nest City.

My next post will recap the chapters of Part Two – Organizing for Emergence.

The following post will lay out the shape of Part Three’s four chapters.

This post marks the beginning of Part Three – Nest City. Here are some plot helpers of Nest City: The Human Drive to Thrive in Cities, the book I am sharing here while I search for a publisher: