Today we choose who will be leading the significant public institutions who have a significant hand in shaping our city.  Today, we choose who will run city hall and our school boards. If you haven’t already done so, here’s a link to a site full of links to candidates so you can make an informed choice (thank you Dave Cournoyer).

As a citizen, you are an evolutionary agent when you make your choice and cast your vote.

Fuel the electoral energy in the city and cast your vote.

The questions put to candidates in the election forums I have been moderating for the Edmonton Federation of Community Leagues this fall are about what city hall can do for citizens. No one is asking what citizens – as communities – contribute to the city as a whole. 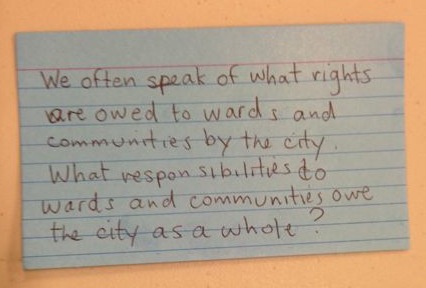 What do we owe to the city as a whole?

Citizens are city makers. We build the physical city in which we live, we build the economic systems in which we work, and we build the social habitat that helps us navigate the world. We choose the city we want by naming it, describing it. When we speak of what’s wrong, we get more of what’s wrong. It’s time to create a social habitat that aims for more of what we want, that delivers on the improvements we seek. This is important work, because at every scale (self, family, neighbourhood/organization, city, nation, planet), what we build lasts: it reverberates for a long time to come. Everything we do shapes our city.

The responsibility of citizens is to be the best citizen possible and prototype social habitats that affect deep systemic change. Here’s how:

Connect  to your Highest Self.

Connect your Self to your city.

Be an evolutionary agent.

In what ways are you an evolutionary agent for your city? 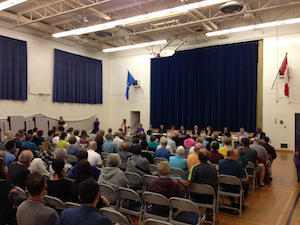 As numerous as the candidates were at last night’s election forum that I moderated for the Downtown and Oliver Community Leagues, most remarkable were the 140 people in the audience, attentively listening and taking notes. (For a recap, check out Mack D. Male’s post.) These citizens were taking the opportunity to see their future councillor in action. These citizens are taking the initiative to be informed voters.

Now that’s a good way to serve your city. Exercise your vote.

An even better way to serve your city is to vote consciously. Here are some questions I ask myself before casting my vote:

These last two are important, because it is not possible for a councillor or council to please everyone. It is unreasonable to expect every citizen to be happy with city hall, because we will all be unhappy with something. The real question is whether the people we elect are smart enough, skilled enough and have the emotional intelligence to build relationships to get things done. I don’t have to agree with everything they do, but I do have to trust that from their vantage point, they see things I don’t see. To trust them, I need to see that they are open to learning from anyone wanting to have their ear.

That’s how I vote consciously.

What action do you take to vote consciously?

Want an election forum in your league? You have the support of the Edmonton Federation of Community Leagues. I will help you design your event and moderate it. Just get in touch – beth@populus.ca

As citizens we spend a lot of time talking about what we don’t want, what we don’t like about our cities. Our government isn’t good enough. There is too much poverty. We are causing great environmental damage. Our economic systems are collapsing. We pay too many taxes. The potholes are not fixed.

There’s a municipal election coming in Alberta on October 21, 2013 – are you telling candidates what’s wrong, or what you love about your city and want more of?

What makes you feel alive in your city?

What city do you choose?

Choose it. Name it. Once you do, we’re on our way to having it.