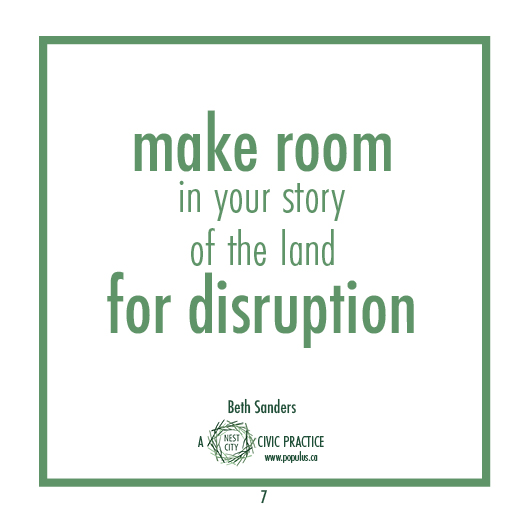 A road trip is full of possibility. With the flexibility of time to take one of those turn-offs, there’s a chance to see something with fresh eyes. At the beginning of July, a friend and I drove from Portland, Oregon to Reno, Nevada in the United States. It was new territory — volcanic territory — that pulled us up to a lookout and down into a cave.
In the northeast corner of California, just west of Highway 139, the Timber Mountain Lookout beckoned us off the highway. Wendy (waving in the photo below) toured us around her summer home, a place to keep an eye on things and send out the alert when there are ‘smokes’ — the evidence of fire. 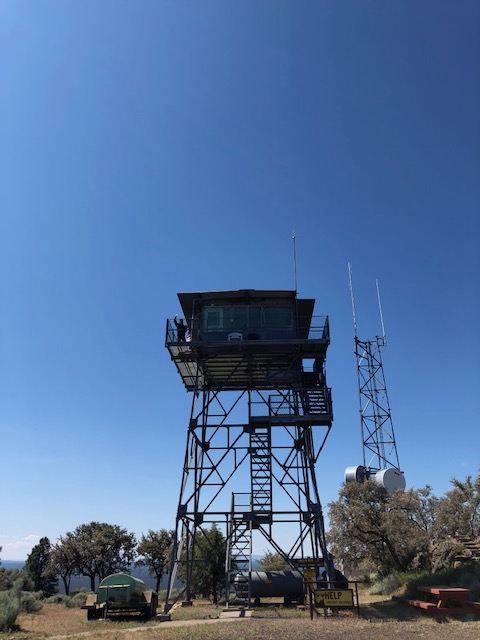 Wendy has all she needs in her lookout. It is a wee home with all she needs to look after herself and keep an eye on the land.
She has a kitchen, a bed, maps, cameras and lenses. 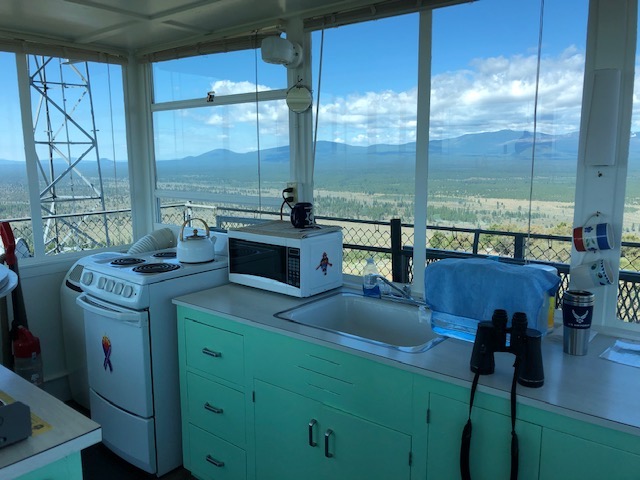 It is a place of solitude, the quiet and peaceful kind or the solitude that comes with proximity of a surrounding storm. It is a place where there are few human and many animal visitors, but contact with fellow humans is the point. Wendy and her fellow lookout colleagues are in contact with each other and the wider emergency response system. In that location she is alone, but she is part of a larger endeavour.
We created these lookouts to keep ourselves safe from fire. We chose to make these structures, at sensible locations, and create a means for the people working in the lookouts to identify clearly the location of smokes for their emergency services colleagues to investigate and, if necessary, fight fire that threatens homes and/or livelihoods.
The lookouts come with a contract — the one who resides in the lookout is expected to see things we cannot see, to see on our behalf. And we who receive their messages trust what they name is worthy of investigation.

The lookout comes with a contract — the one who resides in the lookout is expected to see things we cannot see, to see on our behalf. And we who receive their messages trust that what they name is worthy of investigation.

I wonder, who are the people on the lookout for us all in other ways? And are we willing to receive their messages?

Who are the people on the lookout in other ways? And are we willing to receive their messages?

I took this question to our next stop, nearby lava tube caves and a visitor centre at the Lava Beds National Monument. This second pause in our road trip shone a light on a story dominant culture does not like to hear: we settlers arrived to colonize North America and kill or displace people already here. 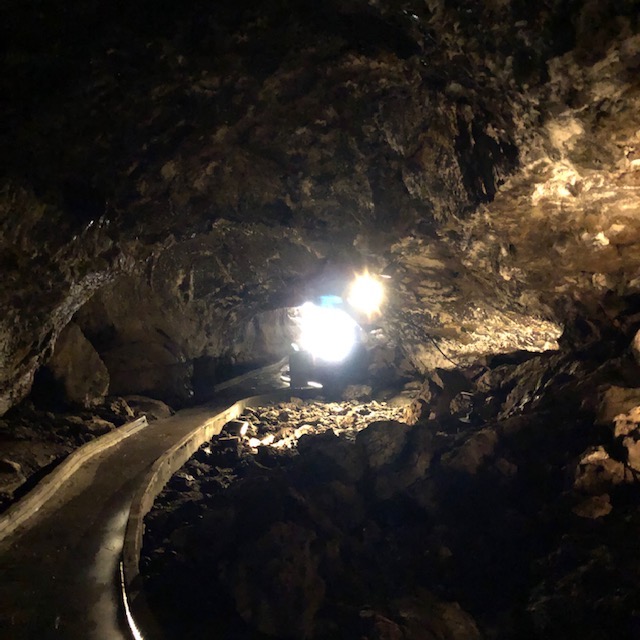 A cave, for me, is dark and unfamiliar terrain,  a world that is unsettling and uncomfortable. Unfamiliar to me, yet intimately familiar to the Modoc people who have left evidence of having lived here for 14,000 years.
When European traders and settlers arrived in the early 1800s there was displacement and a change in the way of life. Then displacement turned into state-sponsored extermination and California’s state legislature funded of a campaign to kill Native people: state sponsored genocide.
A standoff between the colonizers and the Modoc people (who resisted ill-treatment and displacement to reserves and wished to be reunited with their homeland) involved the Modoc vanishing into the caves they knew intimately. Outnumbered 10-1, over the winter of 1872-1873 (the Modoc War), their knowledge of the land allowed them to resist and survive.
The Modoc, who know the story of the land most intimately — where to find water, where to find food, what makes good shelter, the stories of the land and sky that sustain life and a thriving culture — were killed or forcibly removed from their homeland to a reservation in Oklahoma. The stewardship of the land changed dramatically.

The Modoc were killed or forcibly removed from their homeland to a reservation in Oklahoma.

The colonizers began a process to reclaim the land for homesteading. Between 1908 and 1930 Tule Lake was drained and converted to farmland. By lottery out of a pickle jar the land was given to homesteaders. A stunning map in the visitor center tells the tale.

By lottery out of a pickle jar the land was given to homesteaders. 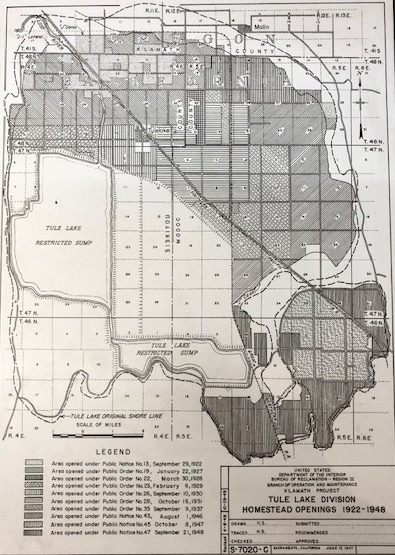 The vast majority of the lake was converted to farmland. What remained of the waterbody was labeled “Tule Lake Restricted Sump”.
Our settler/colonizer language is fascinating:
re*claim
verb
Our language reveals what we thought of the land and the people who lived on it:
We had our idea of what the land could be used for and, deeming ourselves and our ideas to be superior, we occupied the land.  We killed and forcibly removed people to do so, and now we non-indigenous people call it our homeland.

Deeming ourselves and our ideas to be superior, we occupied the land. We killed and forcibly removed people to do so, and now we non-indigenous people call it our homeland.

I feel a connection to the story of the Modoc because it helps me see my family land lineage more clearly. In similar fashion, colonizers declared land open for homesteaders in central Alberta and my Norwegian great-grandparents arrived as homesteaders. In another family branch, my grandparents took advantage of others having declared land was available for purchase on a lakeshore. They bought lake property to serve as a recreational property, along with many others, surrounding an Indian Reservation. And me, I own land in my city that was claimed for settlement of non-indigenous people. There are Indigenous people who feel the land my city — and “my” land — sits on was stolen. My family lineage, then and now, benefits from the land we assumed to be ours for the taking.
And here I have a choice about how far to go into this cave, and I have at least two stories to choose from.
I could choose to believe that since my people were stronger and superior, then no reparations are needed. It is a story in which there is no room for weakness, especially mine. There is no room to accept that my people before me did anything wrong. (Or if I do accept they did, there is nothing I have done wrong.) This is a story about winners and losers, and when you’re a winner you enjoy the spoils and when you’re a loser you have to buck up and take it. This is a story that takes me to the entrance of the cave and causes me little discomfort as I continue to reap the benefits of living in a system works to raise my people and put others down.
A different story will take me into the cave, where I am uncomfortable and in the dark, unsure how to make my way forward. It is the settler/colonizer story where I take intergenerational responsibility for the actions of my people, decades and centuries ago, that were taken from a place of superiority and power. It is a story where I accept that I am part of the settler/colonizer culture that continues to benefit from having taken land. I am part of the settler/colonizer culture that experiences unearned privilege because of my ancestors actions. I am part of the culture that continues to propagate this old story: we settler people are better than Indigenous people.

I am part of the culture that continues to propagate this old story: we settler people are better than Indigenous people.

A part of this new story shows up in how we tell the story of the land we live on, whether the land of the Modoc, or the Plains Cree where I live. I grew up, and was trained as.a city planner, thinking about two things: 1) the geography and nature of the land (topography, water systems, plant life, geology, etc), and 2) the story of settlers on the land. I paid some attention to the Indigenous people who traverse these time horizons, but not an appropriate amount. Our pattern is to behave as though a group of people did not and does not exist. Further, we are conditioned to not take into consideration their existence.
How we tell the story of the land is changing. The usual story I tell and hear, as a settler/colonizer, is the big natural story, and then the story of settling the land. We are conditioned to tell the story as though no one was here when we arrived. We tell the story as if there were no humans of worth here.
Yes, Medicine Lake is a volcano that has been active for over 500,000 years, with the last eruption 950 years ago. Yes the Oregon Trail and the Applegate Trail are significant stories of European “discovery” and settlement of western North America. Yes, the Lava Beds National Monument acknowledges, rather than hides, the story of the Modoc, but it is the stories of settler/colonizer triumph, the hardship, the hard work, the heroes, the defeated that thrive. And we avoid looking at the stuff that makes us uncomfortable. We avoid looking at the things that take us off the security of our superiority pedestal.

We avoid looking at the things that take us off the security of our superiority pedestal.
The new story will acknowledge this more widely.

The new story will acknowledge this more widely.
My friend and I went into one easy to travel (and lit!) cave. There are many more deeper, darker and challenging caves to look explore. As i write, I imagine myself in a place of solitude up on Wendy’s lookout on Timber Mountain. I learn some peaceful things about myself, and I also witness the disturbance of stormy weather within myself.
There is a series of caves I have only begun to explore as a settler/colonizer of North America:
The story of the land we live on is not singular. The story I grew up with, the dominant story, conditions me and us to believe in a superior people. And this story works very hard to maintain its position of dominance. The way to erode the power of that story: make room for others stories of the land, and our relationships with the land. This makes room for disruption.