While hiking last week on the West Coast Trail, on the western edge of Canada’s Vancouver Island, my brother and I came upon a derelict and abandoned donkey engine. We stopped to marvel at its existence at the edge of civilization. 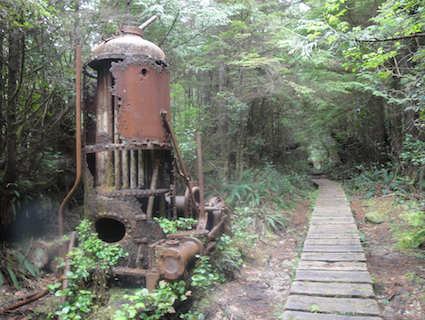 Long before foreign sailing ships reached the coast 200 years ago, the Huu-ay-aht, Ditidaht and Pacheedaht lived on Vancouver Island’s west coast. Our trail map reports that as trade increased, “many sailing ships met a tragic fate navigating in these unfamiliar and hazardous waters. Sailors soon referred to this coastline as the ‘Graveyard of the Pacific’.”

One of the derelicts of the times is the donkey engine, which took part in the work to establish communication between villages and new lighthouses – a telegraph line that also became a trail for shipwreck victims and their rescuers.

So what does a donkey engine on a remote trail have to do with city making?

Think of it this way – when we need something to improve life for self and others, we organize for it. And in the process, we change the shape of the places that are involved. One the west coast, when the shore became a graveyard, people recognized that action needed to be taken. They took action, built lighthouses, a telegraph line and a trail. And they left a story behind.

The donkey engine, if nothing else, stands out as a physical marker of the trail’s original purpose. When its job was done, it was left where it stood.

The very purpose we build structure for – any part of a city – changes over time. And that is part of the city’s story too, only we see it in many more layers. We really do shape our landscape, and we also shape the stories we tell ourselves about our cities and the places we explore.

What is your favourite layer of story in your city?