I began this series of posts on evolutionary intelligences with integral intelligence (part 1 and part 2).  In these two parts, four maps were shared that help us see our cities as wholes.  One of those maps was the integral map with four quadrants (see part 2).  Marilyn Hamilton imagines the four quadrants as four intelligences for an Integral City (her book, her website).

This is the third of four posts that look at four of the evolutionary intelligences for the city from the vantage point of each of the four quadrants.  The last post, embodying intelligence in action, explored the upper right quadrant – outer intelligence.  Today, we look at the lower right and our capacity to create structures that meet our needs in cities.  In particular, this intelligence is about building structures that flex and flex and flow in response to our changing needs.

The city is a built environment.  It is built by us for us.  It is built to serve our needs, whether we do this consciously or not.

When I first started the Nest City Blog back on May 1, I traced the migration of humans from a small settlement in Africa to the expanse of our planet.  As we migrated, we physically built everything from makeshift shelters and eventually cities.  We also built social structures to organize ourselves to meet our needs.  As we build cities, we build physical artifacts and social systems.

The relationship between physical and social structures is critical.  As Hamilton puts it: “… the alignment of infrastructure and human organizational structure optimizes intelligence [1].”

Building intelligence is part of the story of the evolution of St. John’s, Newfoundland that I relayed in my posts entitled Is the uplanned city unplanned? Part 1, part 2, part 3, part 4).  In these posts I write about how as the purpose of a settlement evolves, the structures (physical or social) evolve alongside (see part 3).  These structures will respond to the life conditions of the time – and our value systems as they are evolving.  This is the essential relationship between us and our habitat, and one of the results is our building intelligence.  (For more on evolving value systems, please visit A primer on the emerging spiral.”

So our structures reveal our values.

Edmonton’s City Market Downtown is vital to the exchange of goods in the city, particularly between the city and its region: 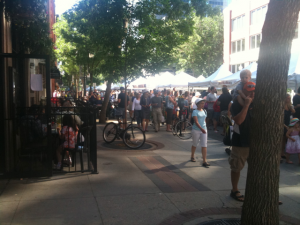 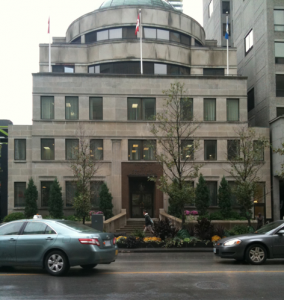 The Art Gallery of Ontario exhibits creativity and entrepreneurship: 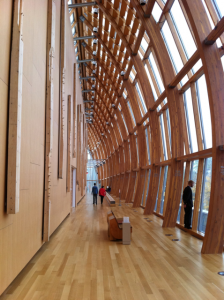 The physical shape we give our cities reflects our values, as do our social structure choices.  This is how our building intelligence of the lower right quadrant materializes in cities; “Structures become a visible history of human intentions, choices and relationships [2].”

What we build (physically and socially) always adjusts over time in response to our needs.  Our ability to do this rests not alone in the building intelligence of the lower right quadrant. It has everything to do with our ability to adjust our intentions (upper left) and our actions and choices (upper right) that result in what we build (lower right).  The integration of these integral city perspectives is what creates the conditions for cities and citizens to thrive – particularly when this intelligence can flex and flow with the changing conditions.

My next post will highlight the lower left quadrant – story intelligence – and how we culturally feed each other in our cities.

If you are interested in learning more about evolutionary intelligences relating to cities, you will be interested in the Integral City eLaboratory – Co-Creating the Future of the Human Hive