… the continuing story of St. John’s, Newfoundland.  A wonderful example of how our life conditions, our habitat, connects to the purpose of settlement and cities.  (Here is Part 1.)

Five hundred years ago, St. John’s was a sheltered, ice-free harbor, a place for ships to rendezvous at the eastern point of North America.  As power and might were driving European colonial expansion, securing the lucrative Newfoundland fishery became a military imperative.  When Sir Humphrey Gilbert arrived in St. John’s harbour in 1583 with 5 ships and 260 men, he announced to the men of thirty six Spanish, Portuguese, French and English fishing boats that they were under English sovereignty.[1]  The port of St. John’s was fought over: the Basques took it from the French; Dutch from the English; and several wars between the English and French wars culminated in English possession of St. John’s in 1762.

The early recorded shape of St. John’s is as military life on the edge of North America.  A map of St. John’s in 1784 shows two forts (Townshend and William), the town, consisting of a series of buildings along the harbor.  Sir Francis Owen’s survey map of 1798 shows more fortification: numerous batteries, a block on Signal Hill, Fort Amherst and Fort Waldegrave.  He also notes the hospital, court house and custom house.  The settlement is still small – still a series of buildings along the harbour.  The church illustrated, but not named.  Other familiar names of the places in St. John’s are named:  Kitty Vitty [sic], Georges Pond, Cuckold’s Cove.

By the end of the 1800s, Newfoundland secures its position as the worlds largest exporter of salt cod.[2]  In St. John’s, this means more houses at the edge of the harbor and the fish flakes on hand to preserve the catch.  As trade with others grows, more docks and wharfs appear and more houses and boats.  And the trades to support this work: pharmacies, offices, stores, warehouses, trades and suppliers.  A plan of St. Johns in 1856 shows a much larger physical settlement to accommodate a population of 30,000[3], almost 10 times that of 1798. The unplanned, disorderly city we recognize in today’s St. John’s, between the water and New Gower Street, has appeared.  However, the map itself reveals extensive order and thoughtfulness.  What the settlement needs is on hand:

The people of St. John’s, and the authorities supporting St. John’s, provided sufficient order to meet the needs of the emerging city; the activities of fishing, preserving, storing and shipping the catch needed a town with it to support the industry. As years passed, citizens and governments alike noticed when conditions changed and something new was needed, and likewise, things no longer needed were discarded.  And so the city evolves, constantly adjusting to changing life conditions.

In the 150 years since the ‘unplanned city’ that we now recognize surfaced, life conditions continue to shape St. John’s.  Geography continued to play a significant role: Marconi’s first transatlantic (wireless) telegraph is sent to Signal Hill in 1901 from Cornwall, England.  A Coronation Souvenir Map, 1937 shows a city still expanding.  In World War II the fortifications were again used to protect transatlantic shipping routes and America’s most Eastern point of land from the attack of German U-boats.  Torpedo nets were set up across the narrows to protect the harbor.  New gun batteries were placed at Fort Amherst, and the American military base, Fort Pepperell, was built. The territorial impulse expanded from the British Empire to the Allied Forces.

Our times change the activities of the city: the decline in demand for salt cod and the increase in demand for frozen fish in the mid 1900’s industrialized fishing patterns; the decline of fish stocks resulted in the 1992 fishing moratorium and economic hardship.  The late 1990s brought offshore oil production – 100 million barrels of oil in 2010 for Newfoundland and Labrador – and St. John’s role as the primary offshore energy supply and service center for East Coast Canada.  Today, cruise ships regularly visit St. John’s as part of their ‘Operation Titanic’, ‘Voyage of the Vikings’ and ‘Top of the World’ expeditions. 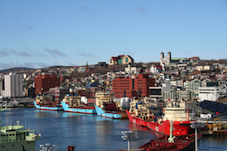 St. John’s sits right where the land meets the water, connecting the past with the present and the future.   The sheltered, ice-free port is strategically located 500 years ago and today.  In reality, this port city never existed in isolation; it has always been about connections, a meeting place.  It served as a rendezvous site and safe harbour for European nations 500 years ago.  It supported the connection between Europe and the North America through the fisher.  It connects communities by providing supplies and services with other Newfoundland and Labrador communities, with Canada and the United States, and ships crossing the Atlantic Ocean from points all around the world.  And to be all of that, St. John’s became a city.

The shape of St. John’s is derived from its geography, its purpose, the activities within and in connection to other cities.  It may not have been planned to be what it is today, but it is certainly  not unintentional.  Is that enough to say that it is unplanned?  It did what it needed to do in each stage of its development.  Does ‘planning’ mean that it should have done more than respond to the life conditions at each stage of development?

In my next post, I will bring the pattern to light: that there are evolving purposes to cities.