There is a pattern in human activity that reveals how our intelligence evolves (Figure 1).  The story of St. John’s emergence as a city in Chapter 2 – The Planning Impulse highlights this evolution in the creation of a city.  The purpose of this post is to provide a primer in one way of thinking of evolving intelligence: Spiral Dynamics.

Imagine the double-helix spiral of our DNA and the work that has been done to catalogue our genes – the codes that guide our physical being. Imagine a similar spiral with our cultural codes: our organizing principles.

Don Beck and Christopher Cowan, drawing on the work of Clare Graves in the 1970s, have revealed how the organizing principles emerge in humans, and how they glue together our social systems. This area of work is called Spiral Dynamics.  The organizing principles are found in levels of value systems that emerge as we evolve.  They are called value memes, or vMEMES for short (rhymes with genes), as coined by Richard Dawkins.

vMEMES are codes, or behavioural instructions that are passed on from generation to the next, social artifacts, and value-laden symbols that glue together social systems.[1]  Beck and Cowan:

These vMEMES include instructions for our world views, assumptions about how everything works, and the rationale for decisions we make.[2]

We evolve and grow through these vMEMES – as individuals, as families, cultures, workplaces, cities, nations and as a species. Here is a summary of the eight vMEMES that have appeared to date in humans – our ideas and beliefs gather around each of these: 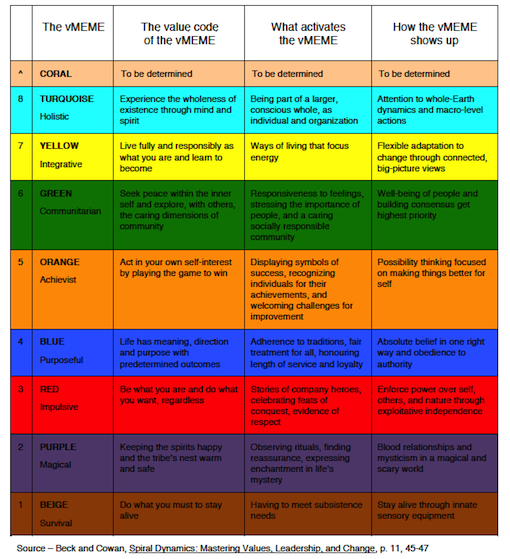 The spiral of city purposes in Figure 1 is an interpretation of the vMEMES described above. Here is another take on the spiral with some key words you will recognize as the structures and processes associated with ways of thinking at different levels of the spiral: 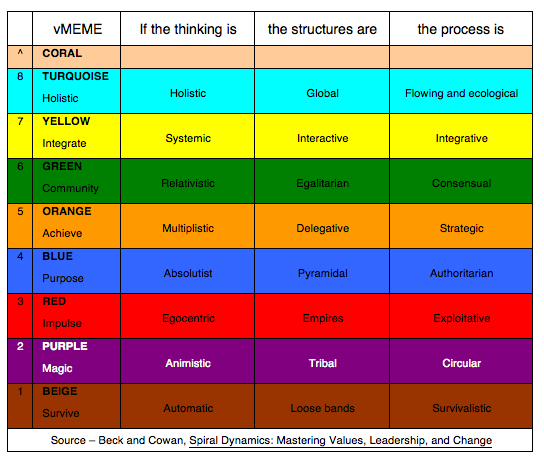 The first six vMEMES, BEIGE through GREEN, form the first tier of value codes.  Their focus is subsistence.  Very simply: BEIGE, is explicitly about surviving.  When our basic needs are met, in PURPLE we survive together and make sense of the magical world in groups.  When resources become scarce, our groups compete for independence (RED).  When we recognize that stability is needed, BLUE surfaces and we establish institutions, protocols and rules with purpose.  When those rules get in the way, ORANGE shows up as an entrepreneurial, creative spirit.  When uncomfortable with achievement orientation of ORANGE, GREEN emerges and seeks caring and socially responsible communities.

These first six vMEMES have very little tolerance for each other; we see great conflict between the values of competition and community, or the power of the individual vs the role of the collective.  A second tier of  vMEMES (YELLOW, TURQUOISE) surfaces when we desire to integrate the first six.

It is critical to note that none of these vMEMES are better than another.  They simply reflect different perspectives on what the world  and its complexity .[3]  Each vMEME builds on the one(s) before.  Each building block arrives as we adjust to new levels of complexity. Each transcends and includes the previous vMEMES, responding to increased complexity in the world, meaning that the building blocks already created remain in us.

How does the Spiral work?  The next post will describe seven principles that frame the emergence of new patterns.  As Beck and Cowan put it, the trends that generate trends…