The seven principles are[1]:

1.  Humans are able to create new vMEMES.  Looking back over the history of the human species, Beck and Cowan track the emergence of each vMEME[2]: 50,000 years ago PURPLE emerged as we formed tribes, experienced magic, art and spirits.  10,000 years ago the RED world emerged with warlords, conquest and discovery.  5000 years ago BLUE emerged with literature, monotheism and purpose.  1000 years ago ORANGE mobility, individualism and economics came to the fore.  150 years ago the GREEN vMEME emerged as human rights, liberty and collectivism.  YELLOW emerged 50 years ago with complexity, chaos and interconnections.  TURQUOISE emerged 30 years ago with a new discourse on globalism, eco-consciuosness and patterns.

2.  Life conditions awaken vMEMES.  VMEMES are a product of our interaction with the life conditions that we face in the world.  This is not a scripted biology, but rather a result of dynamic interaction between our internal states and our external world.  The age we live in, the place we live in, the problems we face and the social circumstances we find ourselves in shape our beliefs, ideas and values.  For example: 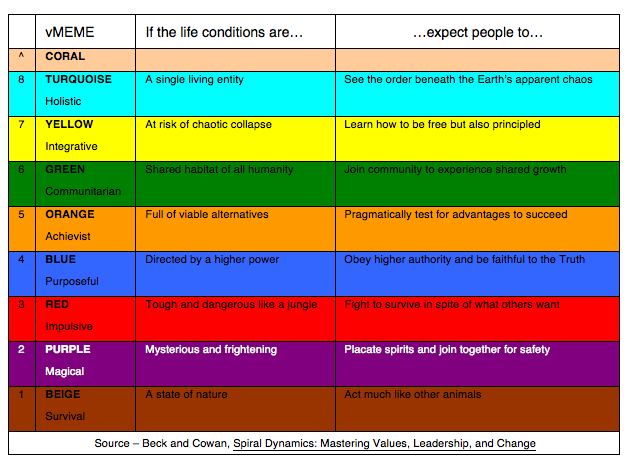 3.  vMEMES alternate between ‘me’ and ‘we’ focus.  Imagine a pendulum that swings between two poles.  As the pendulum approaches each pole, it generates life conditions that can only be addressed with solutions from the other.  Here are the two poles and their characteristics: 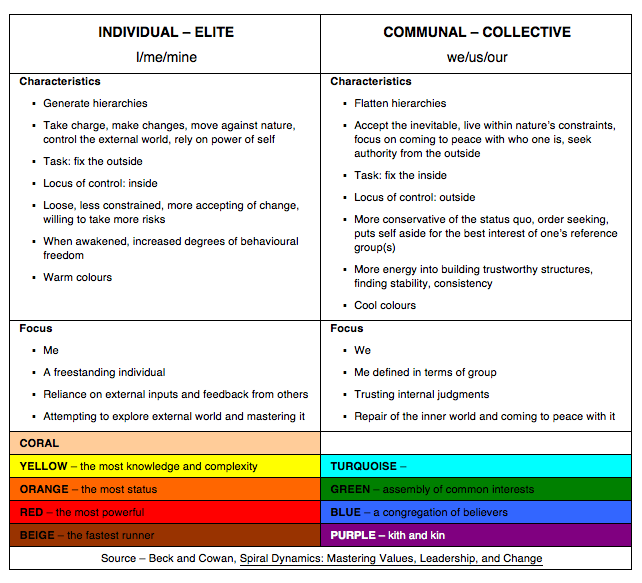 4.  vMEMES emerge in waves.  Beck and Cowan describe this best: “New vMEME systems come in like waves to a beach.  Each has its own ascending surge… At the same time, each also overlaps the receding waves of the previous system as they face.  Sometimes the interference generated as the new systems compete in their ascendancies slows the overall Spiral’s momentum, even shoving it backwards.  At other times, the vMEME waves resonate and reinforce one another to speed the evolution of thinking along.”[3]
5. Higher levels of complexity emerge along the Spiral.  There are four characteristics[4] of this flow:
6.  vMEMES co-exist.  We have the capacity to think in many different ways about many different things all at the same time. While I may be very competitive (RED) on the soccer field, I am also conscious and respectful of the rules (BLUE) and the diversity of skills (GREEN) of my teammates.  I notice the strategic (ORANGE) choices our coach makes about who plays where, how and when on the field, and I appreciate the sense of belonging we have created as a team (PURPLE).  How bright each of these vMEMES shine depends on the life conditions – at a game, RED will be brightest.  As I write, PURPLE is surging as I notice the fond connection I have with my teammates.
7.  There is a momentous leap after the first 6 tiers.  The first six vMEMES, BEIGE through GREEN, are the culmination of our primate nature.  They are the 1st  tier of human development and focus on human subsistence.   The 1sttier vMEMES have very little tolerance for each other.  They conflict and clash, and these are the seismic battles we experience in the world.The leap to the 2nd tier offers a shift from subsistence to ‘being’ – which means appreciating the wisdom of each of the first six vMEMES.  Beck and Cowan advise that the momentous leap is characterized by a dropping away of fears and compulsion, an increase in conceptual space, an ability to learn a great deal from many sources, and a trend toward getting much more done with much less energy or resources.[5]  The words of Clare Graves:
After being hobbled by the more narrow animal-like needs, by the imperative need for sustenance [BEIGE], the fear of spirits [PURPLE] and other predatory men [RED], by the fear of trespass upon the ordained order [BLUE], by the fear of his greediness [ORANGE], and the fear of social disapproval [GREEN], suddenly human cognition is free.  Now with his energies free for cognitive activation, man focuses upon his self and his world [YELLOW, TURQUOISE, etc.].[6]

Summary of the principles

The seven principles provide insight into how the Spiral works.  We are able to create new vMEMES and we do so in response to our life conditions – our habitat.  As we do, the focus of the vMEMES swing back and forth between ‘me’ and ‘we’.  New vMEMES arrive like waves on a beach – always in relation to the other waves – with each wave upward bringing a high level of complexity.  As these vMEMES awaken, all the previous vMEMES  remain in tact.  And until such time that a momentous leap is made from the sixth (GREEN) to the seventh (YELLOW) level, where we recognize the value of each perspective, there is great conflict between the vMEMES.
The emerging value systems highlighted by the Spiral are so clear in city life at many scales – self, family, neighbourhood, organization, city, province, nation, continent, world.  Readers interested in an example may be interested in the series of posts on St. John’s, Newfoundland:  Is the unplanned city unplanned? Part 1, Part 2, Part 3 and Part 4.  In the meantime, the next post will look at how we move up and down the Spiral.

[6]   Clare Graves as cited by Beck and Cowan, Spiral Dynamics, p. 274.  Graves’ use of the masculine in this explanation is indicative of his life conditions and the times.