Over the holidays, my neighbour Bob told me about the January Minimalist Challenge he and his family are taking on to remove from their home the things they don’t need. On January 1, one thing goes. On January 2, two things. On January 3, three things, all the way to 31 things on January 31, for a grand total of 496.I love to purge and simplify, so this feels like a good challenge. Like Bob, I have my eye on the end game – 496 things by the end of the month – so I got started. My family and I sent 150 items went to Goodwill on January 3. Another 346 to go.

Finding – and donating – the first 150 items was energizing and easy. The big bag of extra mittens and hats and scarves, essential winter wear are now available for others, along with the kids dress-up clothes that are in perfectly good shape. These are the low-hanging fruit, but how much more low hanging fruit?

I thought the next 150 would be harder, that it would be quite scary, but it wasn’t. On Jan 10 another 235 more things left our home, and I was startled by how easy it was to reach 385. And startled again when we easily found another 125 items, reaching a total of 510 items, and surpassing the target of 496.

I had a feeling the last 100 would be excruciating and instructive, but not for the reasons I presumed. I thought it would be hard to part with my belongings, but it is far more difficult to look at the privilege I experience in my life. It is easy to give away what I don’t need because I don’t need it. I have far more than I need.

When we set out on this task, I asked myself why. First, I feel good when life is organized and tidy. When things are tidy around me I feel clarity. I don’t need them to be perfectly tidy, but there is a tipping point where clutter makes my brain cluttered too.

Second, I appreciate the movement to a simpler life, of having on hand what is needed, not an endless supply of things we do not need. Kids grow out of things, for example. Adults have accumulated things we haven’t touched in years.

Third, I want to notice more consciously choose the ‘stuff’ I have around me, whether it has been around me for years, or brand new possession.

I now see there is a fourth reason – I can see more clearly how the world around me (which includes me) conspires to have me spend my money on things I do not really need. Not only does the acquisition of stuff muddle with my brain, it muddles with my financial objectives. When the gratification of acquiring stuff wears off, I see I have wasted my money. And in doing so, I participate in the generation of unnecessary waste, and use of unnecessary energy to generate that waste.

The measure of success in this endeavour is not the target – the number 496. The 510 reached in my household could be the equivalent of 203 in another household, or 1413 for another. Without context, which it was, it is an arbitrary target. It would been even easier if we had even more stuff in our home. It would have been harder if we needed to keep everything. It’s not about volume of stuff, but our connectedness to stuff.

A target, or a destination, is often completely arbitrary. Its value is in its direction. The value in the measure – the amount of stuff – is in knowing if we are moving in the right direction or not. As we worked on our challenge, we kept tabs on new things that arrived; anything new moved us backwards in our tally. With a feedback loop, we knew if we were moving in the direction of less stuff, or more stuff.

I thought we had expired the low-hanging fruit at 150, but we were finding low-hanging fruit through to our final tally at 510. There remain corners of our home we have yet explore. We will continue to move in this direction until we have found the hard-to-reach fruit – the stuff that presents itself as a hard choice. Only then will we know that we are making real progress, that our movement is not superficial. 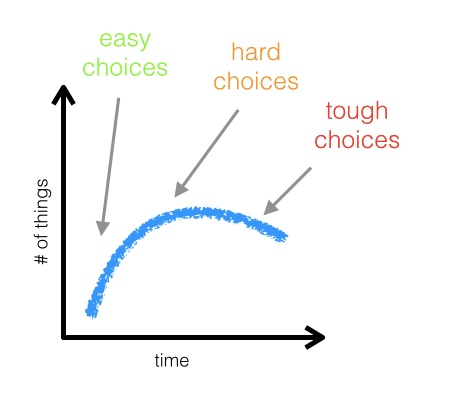 Had we stopped at the target of 496, the effort would remain superficial. We will continue to move until the hard choices present themselves, and at that point if we stop, we will have made progress. If we keep going, leaning into the hard decisions, we will be making fundamentally deeper decisions about the direction we wish to go.

You know you are moving in a direction when you make a choice.

You really know you are moving in a direction when the choice is hard.