Over the weekend, I found myself exploring the valley I visit most mornings, as part of my centering practice, from a different perspective. Instead of standing and sitting at the edge of the ravine, overlooking how the wild knits itself into the city, and vice-versa, I found myself leaving the top of the bank and heading down to the North Saskatchewan River.

As I peeled away from the infrastructure of the city, I was reminded to slow as I headed downhill, with the flow of the trail, where a stream used to be, toward the river. 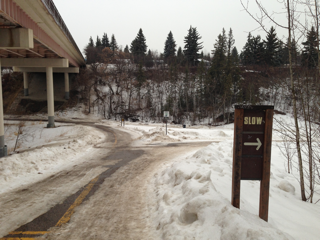 As I arrived at the river’s edge, I broke off the formal trail to explore a trail closed by officials, just above and beside the river. I walked along for a few minutes, but a wee path behind me was calling me down to the river herself. 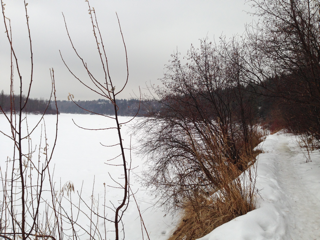 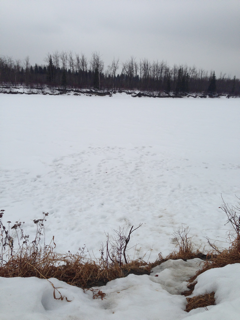 More specifically, the footprints on the river were calling me. As I had been walking parallel to the river, I realized the reason I was staying on the land was because I was afraid of stepping down, onto the river. Upon closer inspection, I could see that once down the bank I would still be on land. I could see the ‘beach’ on this outer edge of the river angling ever so slightly down to the flat of the ice, the river herself. I have spent a lot of time in my river city, but I have never been on my river. So I stepped out for a new view. 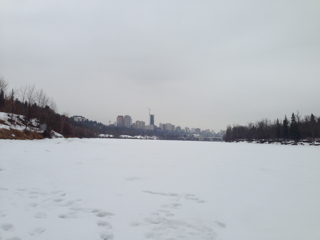 After a few cautious steps onto the river, I noticed that I did not have the courage to venture out as far onto the ice as others had – I chose not to step out as far as many footprints left behind before me. My comfort had rippled out far enough, so I trusted my instincts and stayed put for a while, curious about this perspective of my river city in winter.

I have been pondering how the city and the wild knit themselves together. Cities begin with settlements that are appropriate to the geography –  early explorers and settlers navigated for settlement habitat. The city and the wild, however, are never fully separate. The wild reaches in, and the city reaches out, yet as I have walked, cycled and driven over this river for decades, I have not been on this river. I have stood on the river, and I recognize a need to be on the river in the opposite season, summer. This coming summer I will paddle through my city. What will my city look like? How will it change what I see, what I feel about my home?

Like most journeys, it is when I turn to return that I see something else. 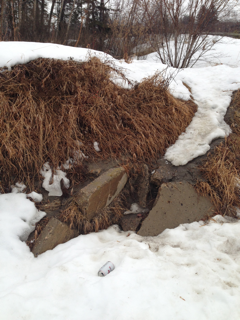 The city is not simply up on the riverbank; it is in the river. Concrete remnants of construction and a beer can have reached down to the river. As I look downstream I see storm sewer outfalls that will whisk water away from the city into the river. The city continues to reach into the wild.

It occurs to me that first times can be daunting and exhilarating, scary and thrilling. First times, and how we handle them, play a critical role in our ability to see possibilities in all aspects of our lives, for seeing possibility often means seeing things from a different perspective, with a fresh look. A fresh look might mean a new physical perspective, or a mental one. It means finding a way to look anew at an old perspective, generating a ‘first time’ feeling that allows possibilities to emerge.

My lesson – stand on the river to see new possibilities. While I wasn’t the first person to look at the city from here, and I won’t be the last, that isn’t the objective. The objective is to find courage to step out on the ice and to simply see what I will see, and to see what I will do with what I see.

I had to step into a new place in my city to see me differently.

What do you do to create the conditions for seeing possibilities?

This post is part of Chapter 7 – (Un)known Possibilities. Here are some plot helpers of Nest City: The Human Drive to Thrive in Cities, the book I am sharing here while I search for a publisher: