The evolutionary pattern of wholes, or holons, is helpful to understand purpose at scale. To explore this, I draw on the work Arthur Koestler, Ken Wilber and Steve McIntosh, who articulate the sequence of evolutionary emergence where each evolutionary entity, or level, is a whole and a part. Each whole is also a part of larger wholes. Marilyn Hamilton’s nested holarchy of city systems (Figure A) is an example. 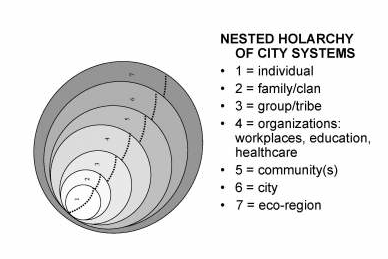 Holons, which are each whole, are nested as parts of other holons/wholes. The smaller wholes are more numerous. Imagine the cells that make up your body; they are far more numerous than the one whole body that is you. Likewise, you are one whole, along with many others, that make up the whole family to which you belong, or the organization where you work, or your neighbourhood or city, nation or species.

Larger holons emerge as entities that transcend and include the smaller holons in new combinations. The larger holons are  not fundamental, but rather ‘significant’. McIntosh on Wilber:

…as evolution produces larger and larger encompassing holonic levels, each new level contains more and more parts and thus more and more whole entities. And as holons come to embrace more whole/parts within themselves, this increases their intrinsic value, or what he calls their ‘evolutionary significance (McIntosh, p. 124-125).’

From an evolutionary perspective, larger holons are more significant than their smaller counterparts, while the small holons remain, and become, more fundamental.

There are two value pulls here: one toward the smaller, fundamental value of encompassed parts, and a second toward the increasing significant value of emergent wholes. While these ‘pulls’ are in opposite directions, they are complementary; they co-exist in relationship with each other. As wholes become larger and more significant, the component wholes that are part of that whole become more fundamental. For McIntosh, this is the nature of evolutionary progress as described by Wilber. 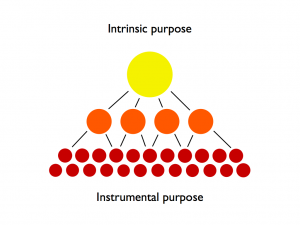 From an evolutionary perspective, at a macro scale, what happens to purpose at different scales?

For McIntosh, the intrinsic purpose, or value, of evolution itself is not static: “its value is ‘alive, free, thrilling, and always moving (McIntosh, p.  160).'” Yet is also moving in a direction, toward goodness, beauty and truth. Intrinsic purpose is grand and shifty.

The process of growth, however, also involves parts that are no longer growing or emerging, yet they “nevertheless [contribute] to the growth of the emergent levels which encompass those parts as a foundation for further growth (McIntosh, p. 160).”  The holons that are encompassed as parts of larger wholes are of instrumental value to the more complex system of which it is a part. Small holons are in service to larger, more significant holons. They are of instrumental purpose.

Recognizing that larger holons are more significant than smaller holons does not negate the value of smaller holons, for they are fundamental. McIntosh puts it bluntly: ” instrumental value is the complementary equal of intrinsic value (McIntosh, p. 156).”

This exploration is a reminder that small entities are building blocks, and their health and well-being have instrumental purpose and value to the entities in which they are part. It is a legitimate, and not lesser, role to play in evolutionary progress. For McIntosh, this “two-fold purpose that orients our personal development is grounded in evolution’s essential organizing structure of wholes and parts, wherein every whole is also a part and vice a versa. Every evolutionary entity thus partakes of both kinds of purpose (McIntosh, p. 155).”

What is your intrinsic purpose?

In what are you of instrumental value?

Koestler, Arthur. A Brief History of Holons, by Mark Edwards

McIntosh, Steve. Evolution’s Purpose: An Integral Interpretation of the Scientific Story of Our Origins