I am no longer Canada’s biggest fan, as I used to be.

At Canada’a 125th birthday I was a big fan of Canada. I was a crazy fan doing my bit, at 22, to make sure Quebec and Canada stayed together. The context:

In February of 1992, I created a giant valentine for Canada. 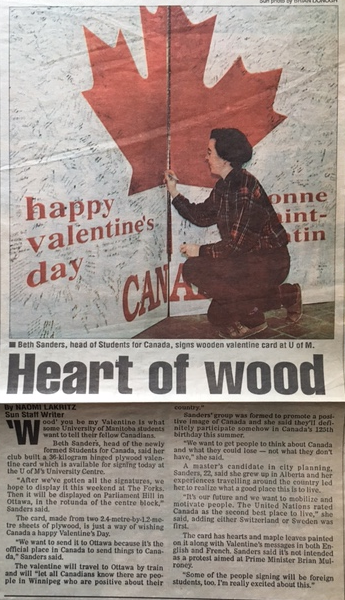 It filled up, gathering over 9000 signatures. 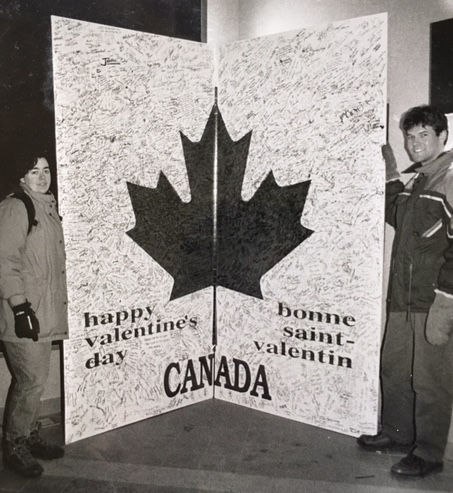 And I found myself in Ottawa, in a scrum on Parliament Hill, to present it to constitutional negotiators, and at press conference at the National Assembly in Quebec City. 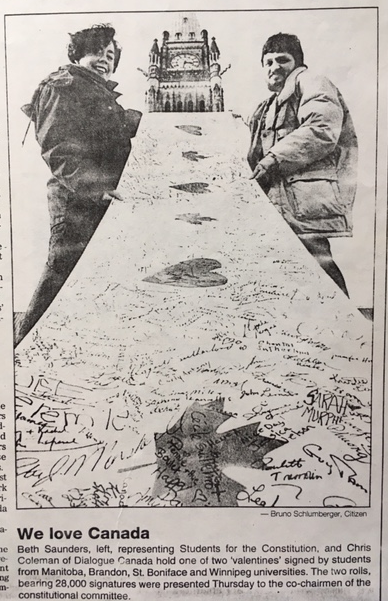 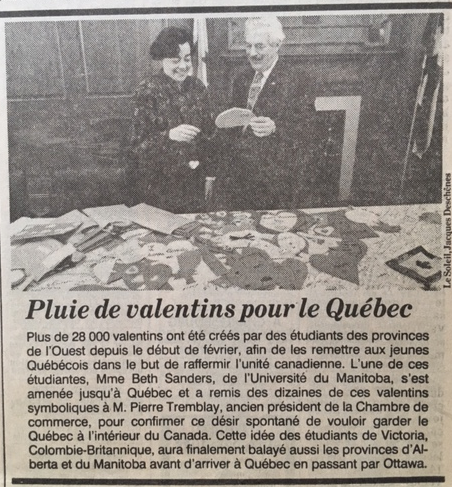 I see threads of consciousness within me about the story of Indigenous people on the land that has become Canada. As a student at the University of Ottawa, in the first years of the multidisciplinary Canadian Studies program, I can still see a map of nations established before Europeans arrived. I knew about residential schools (and spotted it immediately when I moved to Brandon, MB) and the indignities of the Indian Act. I wrote a paper about the Lubicon Cree and their struggles to live their traditional way of life. I can see in my mind Elijah Harper, standing in the Manitoba Legislature, putting and end to the Meech Lake Accord for a clear reason: Aboriginal people were left out.

I know that the Charlottetown Accord negotiations in 1992 included federal, provincial and territorial governments as well as representatives of the Assembly of First Nations, the Native Council of Canada, the Inuit Tapirisat of Canada and the Metis National Council. I know that Canada said no to this accord, which would have entrenched the right of Aboriginal peoples to self-government in Canada.

Now, 25 years later, a generation later, we have a more true picture of Canada’s relationship with First Peoples. My attention is no longer on the English and the French and the settlers, but rather in how we colonized this place. My attention is on the harm that has been caused by Canada’s policy to “kill the Indian in the child” through the residential school system that was in existence for 126 years of Canada’s 150: from the 1870s through to the last residential school closure in 1996.

More than 150,000 children were removed from their homes and families. They were removed from the influence of their families for their emotional, spiritual, physical and intellectual development. We caused generations of trauma, reaching back generations and into untold future generations. We were doing this while I zipped across the country fussing about Canadian unity, missing the deeper, foundational unity that is needed. The colonizer/colonized in me was alive and well.

The Truth and Reconciliation Commission has offered Canada a great gift, should we choose to accept it. What happened has been documented with detail. What is not documented has been named.  The “truth” is there for us to examine in thousands of pages or in summary report. In addition, 94 actions are named to redress the legacy of the residential schools and take steps toward Canadian reconciliation.

While we resist the calls to action we continue to cause harm.

And a note for us all, the colonized and the colonizer: self-empowerment threatens our sense of who we are, in all ways. It calls us all to grow and expand, and perhaps this, for me, is the primary call to action from the Truth and Reconciliation Commission. We can no longer go an as we were. Especially those of us who feel like we had nothing to do with it. The truth is we did. We still do.

So no, I am not celebrating Canada’s birthday. I acknowledge 150 years as a milestone and my