For the last 8 summers, my brother and I, our spouses and our kids hike into the backcountry behind Mount Robson on the Berg Lake Trail.  We make a point of travelling as light as possible.  It is a 23 km hike one way, with an 800 metre elevation gain, travelling through 3 biogeoclimatic zones.  It is hard work.  (For anyone keen on satellite imagery of the terrain, here is a link to a google map of the trail.) 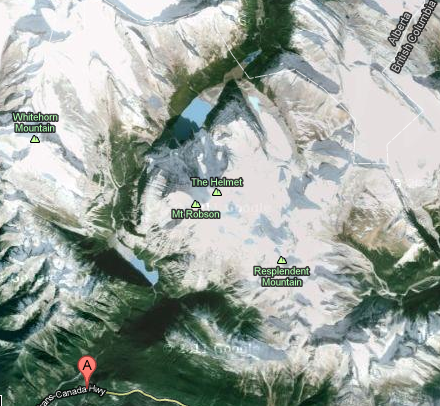 On one of our first voyages on this trail, we came across a family that hiked “old school”.  They had old packs with the frames on the outside.  They carried in a cast iron fry pan, potatoes, cans of mushroom soup and pork chops that were 2 inches thick.  We were in awe of the stupidity of carrying so much weight up that tough hill.  A fry pan?  Huge pork chops?  A can of mushroom soup?  Real potatoes?  It is a story that has been firmly entrenched in our family lore.  The pork chop clan’s packs weighed 80 pounds.  The heaviest pack in our family: 40 pounds.

At the start of the trail this year we spotted the pork chop patriarch.  Moving slow with a heavy pack, resting at the top of the first hill we confirmed it was him.  We were thrilled!  We have been revelling in our own glory for being such smart hikers, carrying as little as possible (while also eating very well, I must add).  We were chuffed to see him moving slow under all that weight he was still carrying…

Until we saw their food this year.

Chicken breasts with a fresh vegetable sauce on pasta.  The preparation involved three stir fry pans (they are cooking for 7 hungry adults.)  Steaks and 5 pounds of carrots and at least 2 pounds of onions.  Followed by two banana cream pies with whipped cream.

And they were staying two more nights to enjoy more delicious meals.

While we may choose to travel light, we have to notice that these crazy (in our minds) folks have it right.  They work hard and they eat hard.  They love being in the mountains and they are not afraid of hard work.  They enjoy their food and they clearly enjoy being with each other on their mountain adventure.  A family hike with family meals.

Like my family, they do this trip over and over.  The pork chop patriarch’s kids have travelled from the south of British Columbia and Saskatchewan to meet him here (he’s from northern British Columbia) and spend this time together.  When we met them before, his daughter’s fiance was with them and we imagined that this was some kind of test to see if the fellow would fit in.  This year, the daughter’s husband was with them, and a son’s ‘almost-fiance’.

The kids in our group come because their parents’ expect them to because they range from 9-14 years old.  We can only hope our kids continue to join in our family adventures over time.

My nephew summed it up this afternoon as we neared the end of today’s 21 km hike, tired and wet in the pouring rain.  We have been suffering for years of sour grapes.  Just like Aesop’s fox.  It is easy to despise what you cannot get.

It is easy to jeer and belittle what you don’t have the strength to work for.

As my husband put it, ‘Props to the pork chop clan’.

Props – slang for “compliments”, or “accolades”