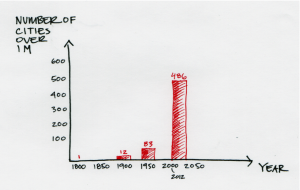 There is something about cities that compels us to create them at an unprecedented rate.   In the year 1800 only one city, Beijing, had over 1 million inhabitants.  One hundred years later, in 1900, there were twelve.  Only fifty years later, in 1950, there were 83.  By April 2012 we have reached 486 cities with over one million inhabitants. (For updates, see Thomas Brinkoff: The Principal Agglomerations of the World.)

Our cities are more numerous, but also getting larger in scale.  In 1950 only two of the world’s cities were home to over 10 million people each: Tokyo and New York.  Mexico City joined the ranks in 1975 and today, we have 27 cities with over 10 million people.   11 of these cities are larger than 20 million, with Tokyo clocking in at an unprecedented 34.5 million.

The growth of the number and size of our cities is taking place alongside an equally dramatic increase in the world’s population.  The United Nations estimates that on October 31, 2011 the world’s population reached 7 billion, and it only took 12 years to grow from 6 to 7 billion people.  Our first billion took quite a bit longer: in the year 1 we numbered 200 million and it took until the year 1850, reaching 1.2 billion, to add a billion.  It took almost 2000 years to grow that first billion, compared to 12 years to grow our most recent billion.  And this population growth is increasingly take place in cities themselves.  For the first time, people living in cities now outnumbers those living in rural areas.  The United Nations’ State of the World Population 2011 estimates that one in two people live in cities today, and in 35 years, two thirds of the world’s population will live in cities.

Our population continues to grow at a staggering rate (see worldometer for real time statistics) – and cities are where we are housing them.  This leaves me with a big question about cities: Are people growing cities or are cities growing people?

This is the first of many posts as I publish Nest City: The Human Drive to Thrive in Cities here, in the blogosphere.  Over the long haul, I will explore our relationship with cities, the very habitat we create for ourselves to survive and thrive.

My next post will explore the work of geneticist Spencer Wells and the evolutionary journey the human population made across the planet – before we began to build cities.

2 thoughts on “Are people growing cities or are cities growing people?”